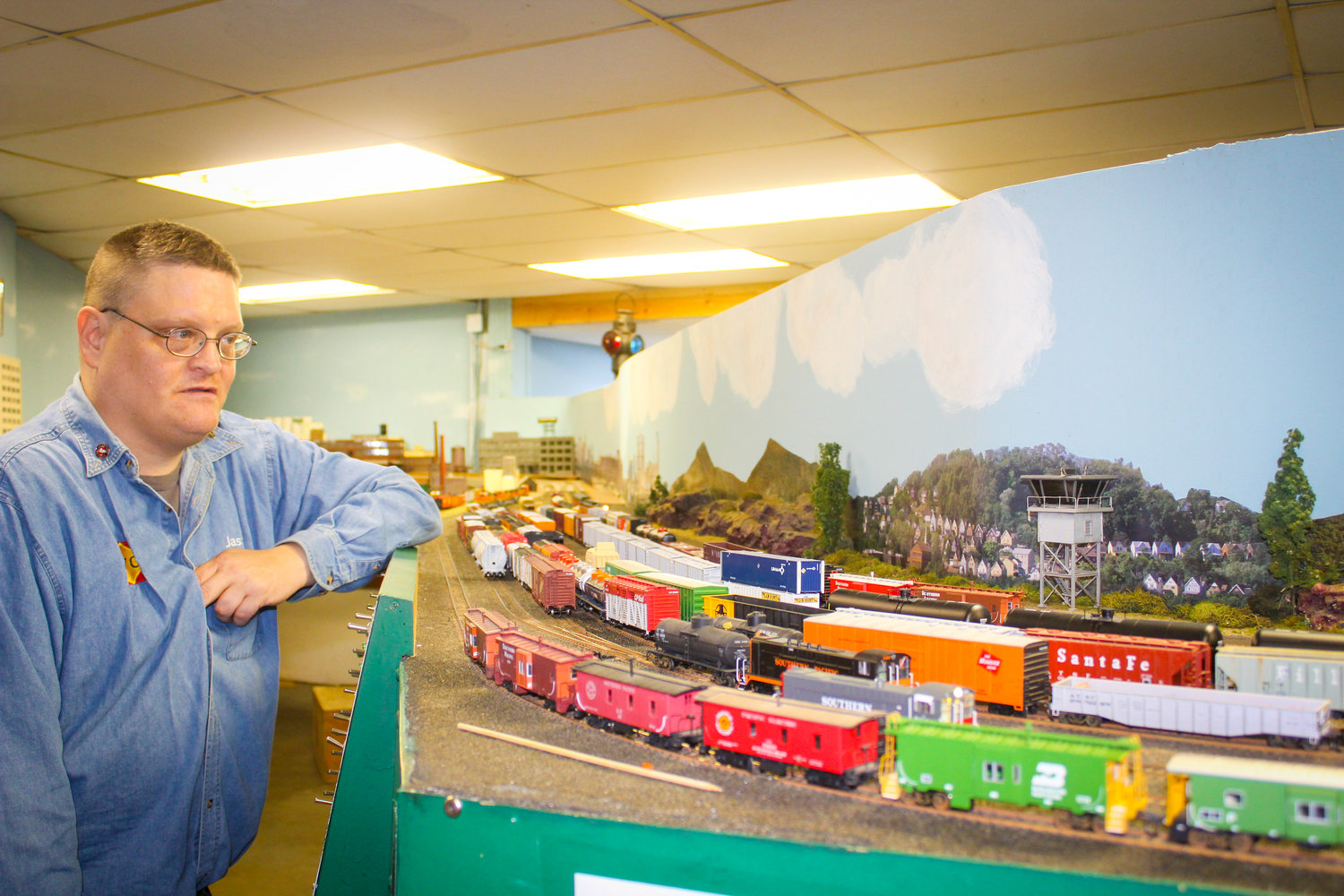 West Central Model Railroad Club president Jay Dennison is pictured inside the club’s building at 895 Clifton St. in Sparta, where an open house will be held Dec. 11.
Herald photo by Nicole Vik 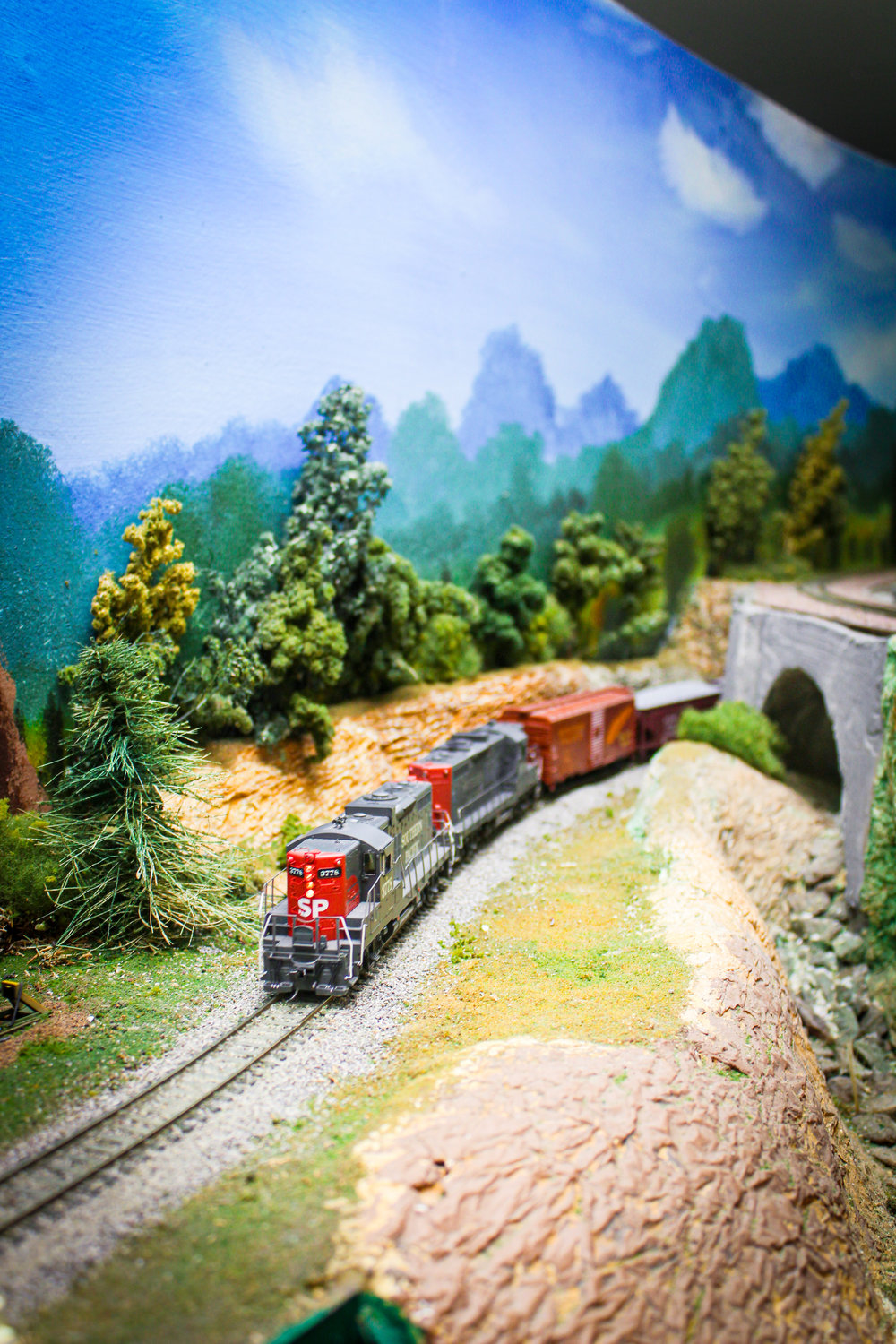 One of the many model trains at WCMRC emerges from a tunnel along a cliffside.
Herald photo by Nicole Vik
Previous Next
Posted Monday, December 6, 2021 12:59 pm
By NICOLE VIK, Staff Writer

The West Central Model Railroad Club of Sparta will host its annual winter open house this coming weekend. Visitors young and old will have the opportunity to see the club’s six scale-miles of mainline, which travels through several different model neighborhoods.

At about 400 feet long, the track winds its way throughout the club’s building, which is located at 895 Clifton St. in Sparta, right next to the Canadian Pacific Railway mainline – making it the perfect place for enthusiasts to gather because when an actual train goes by. Club members liken it to “surround sound.”

The club purchased its current 1,500-square-foot building in the fall of 1987 and started building the impressive layout in 1988. Now, the model railroaders have an extensive HO scale model railroad.

At times club members run it like a real railroad and each member has several different model engines on the track.

Some model tracks run on DC, which is a direct current that is used to control the track, not the trains, and all of the trains on the track will respond. Through the years, the club graduated to Digitrax DCC operation, which is digital command and control so the wireless throttle can connect to a specific decoder onboard the model locomotive that is used to provide control.

The track at the club can run at least 10 trains at one time and has copious amounts of model trains in every color imaginable. Some of the trains are made to look weathered as if they’ve been on the railroad for an extended amount of time while others are shiny and clean.

They vary in style, length and purpose, but they all run along the same tracks – tracks that run through model towns and villages.

Along the tracks, there are several sidings and spurs, which are strategically located along the entire route, serving towns and industries.

The layout features a wide array of scenery, tunnels and trestles as well as an engine facility, rail yards, factories, villages, railway stations, farms and much more. Photo realistic backdrops and paint add to the realism.

Although the layout will likely never be completely finished, club members have done some remodeling since the club’s last open house.

“We are eager to share this great family hobby,” said Jay Dennison, club president. “We will be running trains and answering questions that people may have.”

Visitors are welcome anytime, however, the club’s winter open house will be on Saturday, Dec. 11, from 10 a.m. to 4 p.m. For more information on the club and club membership, visit www.westcentralrr.org or the West Central Model Railroad Club’s Facebook page.

Cranberry cravings: Cranberry Country Cafe is now open in Warrens
When Traci and Kevin Peterson took over the Cranberry Discovery Center museum and store in Warrens last year, they wanted to add a café and introduce people to some unique cranberry …

100 candles
There’s something about Bob Everitt that draws people near him. A packed ballroom of more than 100 people and a table of homemade cakes on Saturday, Jan. 15, at Club 16 in Sparta made that …

Sparta School District battling staffing shortage
“Our commitment is to keep our buildings open.” That was a statement Sparta School Superintendent Dr. Amy Van Deuren made to the school board’s committee of the whole last week …

Memorial Field project with plaza all but a go
The Sparta School Board’s Committee of the Whole last week recommended a $3.25 million Memorial Field renovation project that will include a $200,000 plaza to be funded by the Sparta Gridiron …
© Copyright 2022 Monroe County Herald | Copyright/Terms of Use
Powered by Creative Circle Media Solutions